Holonyak Micro & Nanotechnology Lab Professor Brian Cunningham has been selected as a Fellow of the Royal Society of Chemistry.

Holonyak Micro & Nanotechnology Lab Professor Brian Cunningham has been selected as a Fellow of the Royal Society of Chemistry. This honor is given to researchers whose efforts have made outstanding contributions to chemical sciences or has advanced the profession in some way. 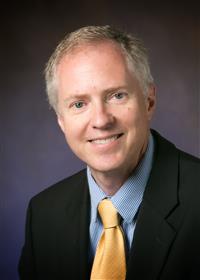 This achievement is particularly noteworthy due to his background in electrical and computer engineering, as opposed to traditional chemistry.

“I‘m an electrical and computer engineer, but in my career I’ve done a lot of work with biosensors and chemical sensors,” said Cunningham, Donald Biggar Willett Professor of Engineering and a faculty member in the University of Illinois at Urbana-Champaign’s ECE department. “It’s cool to be recognized by the Royal Society of Chemistry for the research I’ve done as an engineer.”

Formed in 1848, the Royal Society of Chemistry works to connect scientists with each other for “the general advancement of chemical science and its application.” A Fellow is the highest level of membership within the society.

Up to this point, Cunningham’s interaction with the society had been publishing his biosensor and bioinstrumentation work in several of their peer-reviewed journals, as well as being a reviewer for those journals. In order for him to be eligible to become a Fellow, Cunningham had to be nominated by two current Fellows, have held a senior position, and submit his 10 research papers most important to the field of chemistry.

When asked if becoming a Fellow would impact his research, Cunningham didn’t see his path changing.

“My research will keep going,” said Cunningham. “I’ll continue doing my engineering work with disease diagnostics and point of care detection while collaborating with truly outstanding colleagues who are chemists and biochemists.”

In addition to this latest honor, Cunningham is an AAAS Fellow, a Fellow of the Optical Society of America, a Fellow of the American Institute of Medical and Biomedical Engineers, an IEEE Fellow, and a member of the National Academy of Inventors.