Holonyak Lab to be upgraded thanks to Investment for Growth Program

When Brian Cunningham attended Illinois in the 1980s, the equipment he used in the Microelectronics Laboratory was top-of-the-line. Now as the Director of the Holonyak Lab, Cunningham, along with faculty and students, are still using some of the same equipment.

Holonyak Lab to be upgraded thanks to Investment for Growth Program

When Brian Cunningham attended the University of Illinois at Urbana-Champaign in the 1980s, the etching and deposition equipment he used in the newly-constructed Microelectronics Laboratory was top-of-the-line. Now as the Director of the Holonyak Micro & Nanotechnology Laboratory, Cunningham, along with faculty and students, are still using some of the very same equipment.

“There are pieces of equipment in the cleanroom that have been around for a long time,” said Cunningham, Donald Biggar Willett Professor in Engineering. “Some machines are more than 25 years old, and in some cases the company that made it no longer exists. As talented as our engineers are, it is challenging to keep them working.” 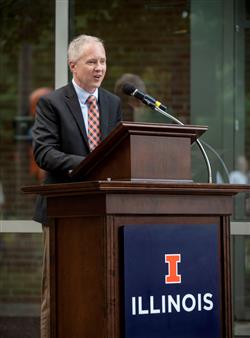 To allow faculty and students the opportunity to conduct the research they need to do, Cunningham led a team of faculty and research engineers at the recently-renamed Holonyak Lab to submit a proposal through the Investment for Growth Program, sponsored by the Office of the Provost. Replacing the old equipment with state-of-the-art capabilities was a large part of the awarded $3.95 million.

“Our proposal was all about decommissioning and removing the outdated, hard-to-maintain equipment and replace it with nanofabrication tools that represent the best capabilities that can be found in a university research environment,” said Cunningham.

The equipment upgrades will give Holonyak Lab the ability to conduct research with a higher level of precision, complexity, and reproducibility. Faculty will have more control over their experiments through sensors, feedback, and the ability to digitize recipes for chemicals, rather than turning a knob.

The most impactful piece of equipment coming to the lab is a 150kEV electron beam lithography system. The current system, with a beam voltage of only 50kEV, cannot provide the resolution to make the nanometer-scale features that researchers require today. In addition, the system runs on a 1990s vintage computer system without enough memory to hold complex and large-scale patterns. The updated 150kV system would be the first of its kind in the United States, once again giving Holonyak Lab the edge.

“The system would leapfrog the other schools in the country that have 100 or 125 kEV capability,” said Cunningham. “We could do things no one else in the country can do in terms of making small features with a high level of precision for applications, including high speed microelectronics, nanophotonics, biosensors for disease diagnostics, light sources, and quantum computing.”

While equipment is a large part of the proposal, the award also includes funding to hire two additional cleanroom engineers that will allow for improved quality control and extended hours for faculty and students to use the facility. The cleanrooms and laboratories within the Holonyak Lab are used by multidisciplinary groups such as the Institute for Genomic Biology, The University of Illinois Carle College of Medicine, and many departments throughout the Grainger College of Engineering. The network surrounding the Holonyak Lab is one of the reasons updating it was so crucial for future success.

“When faculty candidates come interview at the Grainger College of Engineering, they come and look at our facilities and see if we have the capability to support their research,” said Cunningham. “If we show that we’re committed to being at the forefront, it shows that we’re seriously committed to recruiting top-talent faculty who can do their work here efficiently.”