University of Illinois at Urbana-Champaign faculty and former star students gathered on campus October 26, 2018, to honor Nick Holonyak Jr a few days before his 90th birthday, which was November 3. 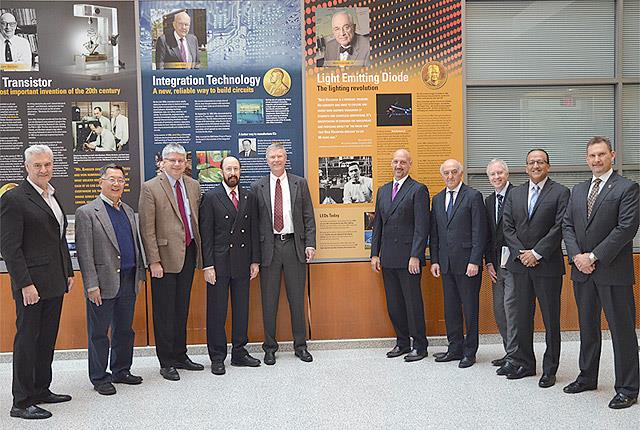 Holonyak, the John Bardeen Endowed Chair Emeritus in Electrical and Computer Engineering and in Physics at Illinois, is known as the father of the LED (light-emitting diode), which he developed in 1962 while working at General Electric in Syracuse, New York. Electrical and Computer Engineering Professor Milton Feng initiated the the event as a way to celebrate Holonyak’s legacy and milestone birthday. Feng is a co-developer of the first transistor laser in 2004 with Holonyak and their graduate students, Richard Chan (BSEE ’01, MSEE ’02, PHD ’05) and Gabriel Walters (BSEE ’98, MSEE ’01, PHD ’03).

After finishing his B.S., M.S. and Ph.D. degrees in Electrical Engineering at Illinois, Holonyak joined its faculty in 1963, working alongside his doctoral advisor and hero, John Bardeen, the two-time Nobel physics laureate and inventor of the transistor. Holonyak spent 50 years as a member of the Illinois faculty.

In remarks at the event, MNTL Director Brian Cunningham said that, while a graduate student at Illinois, he had taken courses with Holonyak. And, after graduating and beginning a career in biosensors, “I tried to bring Nick’s way of approaching LEDs to the way that I would approach biosensors,” he said, and “I can only dream of having the impact that Nick has had.”

Also speaking at the event, College of Engineering Dean Rashid Bashir noted that Holonyak recently reminded students and faculty, “‘You’re working hard for the world, and you’re not just working for yourself.’”

Bashir added, “It’s our job to take that work that we do at Illinois further … and you really haven’t finished until you have shared that idea in a real and very tangible way and unless you have made the world a better place.”

Bashir reminded the audience that Holonyak “has very high expectations of his alma mater … and the place he spent all of his career. And who better to set that standard for us than the inventor of the visible LED.”