In October, Illinois alumnus Mark McCollum (BSEE 1983, MSEE 1987, PhD 1990) joined the Micro + Nanotechnology Lab staff as principal research engineer. He will oversee the operation of MNTL’s cleanroom facility, including the $13 million in fabrication and metrology tools used by more than 50 faculty and 350 students across campus.

"Mark’s leadership in the MNTL cleanroom will have an enormous impact on the capabilities that we can offer to the community of researchers at Illinois who rely upon the operation of our suite of sophisticated tools," said MNTL Director Brian Cunningham. "Mark brings a wealth of experience in semiconductor devices and the methods used to fabricate them. Students working in MNTL will learn from Mark’s experience in Industry, and I expect Mark to be working closely with students to help them bring new ideas to fruition."

“I aim to help make things run more smoothly by improving uptime on equipment so it’s available to researchers, and I can help find funding to upgrade equipment—an ongoing process for a sophisticated operation like MNTL,” McCollum said. “Long term, I can help move things in a direction that’s very enabling for the many MNTL users.” 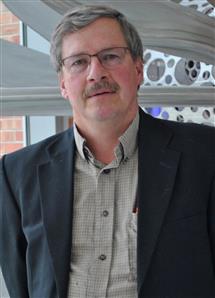 Mark McCollum
For the past 18 years, McCollum has run his own semiconductor consulting firm, helping industry engineers worldwide maintain quality, improve yield, and develop advanced processing capabilities. He also taught engineering courses at the University of Denver, University of Colorado, and the Colorado School of Mines.

Prior to this, McCollum led the creation of a new wafer fabrication facility for Spectrian Corporation, which made power transistors for cell phone base stations; he worked for a molecular beam epitaxy (MBE) equipment manufacturer, helping industry and national lab customers install MBE crystal growth systems; and he designed and built a novel crystal growth system capable of growing semiconductor materials via MBE and chemical beam epitaxy (CBE) at the National Institute of Standards and Technology (NIST).

In fact, McCollum was the first student to ever merge MBE and CBE capabilities in one growth system. As a graduate student in Electrical Engineering Professor Greg Stillman’s group in the Electrical Engineering Research Lab (EERL) during the late 1980s, McCollum grew the highest purity gallium arsenide material that had ever been grown. He also combined conventional evaporative sources with vapor sources.

“Because of Greg Stillman’s expertise and history, our group probably had the best high-purity compound semiconductor characterization capabilities at that time,” McCollum said. “That was good for me and for the other students in the group because they could make measurements that few researchers in the world could make.”

Although he graduated before Stillman’s research group moved into MNTL, which at the time was known as the Microelectronics Lab, McCollum has an affinity for the facility. Stillman was the founding director of a major National Science Foundation Engineering Research Center at Illinois in the mid-1980s. “Greg was the driving force behind that center, which eventually led to the construction of the Microelectronics Lab,” McCollum said.

According to McCollum, he was drawn to the MNTL job for two reasons. “I love Illinois and I love working with smart people,” he said. “I’ve also always been successful at getting equipment and materials to obey, so when I saw a position that had to do with [instructing] people and taking care of equipment and materials I knew it was an excellent match.”