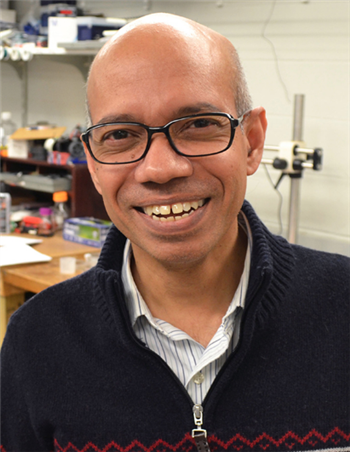 Professor Saif's research focuses on the mechanics of nanoscale materials and living cells. He uses both theory and experiment to explore (1) the effect of size on the mechanics of materials, and (2) the role of mechanical force in determining the functionality of cells and cell clusters.

Professor Saif demonstrated experimentally, for the first time, that plastic deformation in nanocrystalline metal films can be reversible. After plastic deformation, metals with grain sizes between 50 and 100 nanometers recover most of their plastic strain under macroscopically stress-free condition. This recovery is time dependent and thermally activated. Saif showed that the recovery originates from the small size and heterogeniety of microstructure of the metal specimens. The research, which was reported in Science, raises the possibility of manufacturing metal components that can heal themselves after being deformed or dented.

In the area of cellular mechanics, Professor Saif's projects involve neurons, cancer and cardiac cells, and interactions between cells in clusters. He seeks to address questions such as: What is the role of tension in neurons on memory and learning? Does mechanical microenvironment influence the onset of metastasis during cancer development? Can clusters of cells be guided so that they evolve into biological machines? He, together with Professor Akira Chiba of the the University of Maimi, showed that neurons are under mechanical tension, and that such tension might be essential for memory and learning.