Yurii A Vlasov, Founder Professor in Electrical and Computer Engineering, has been elected to the National Academy of Engineering. He is recognized for his contributions to the development and commercialization of silicon photonics for optical data communications. 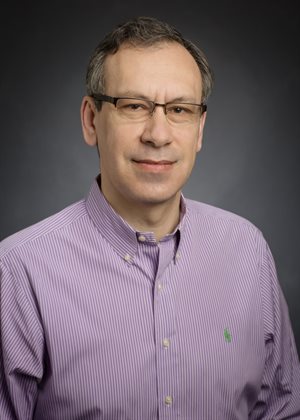 Vlasov is among a class of 106 engineers and 23 foreign associates announced by the academy on February 9, 2021. Election to the NAE is one of the highest professional honors an engineer can garner. Its total of 2,355 members and 298 foreign associates are an elite group distinguished by their outstanding contributions to the fields of technology and engineering.

Vlasov joined Illinois in 2016; previously, he held research and managerial positions at the IBM T.J. Watson Research Center. While at IBM, Vlasov pioneered and developed integrated silicon nanophotonics. The technology integrated electrical and optical devices on the same silicon chip, which enabled the chips to communicate using pulses of light as opposed to electrical signals. This innovation, which is deployed for commercial production through GlobalFoundries, is enabling high-performance optical connectivity in supercomputers, cloud data centers, and telecommunications, while significantly reducing cost and maximizing energy efficiency.

At Illinois, his research has pivoted to integrated neuro technologies. He established the Integrated Neurotechnology lab devoted to the development of advanced engineering approaches aimed at reverse engineering of the brain circuits, with the goal of getting insights on how our brain works to enable novel clinical treatments of neurological disorders.

HMNTL’s Interim Director Xiuling Li lauded the selection. “Yurii’s leadership has made a huge impact on the optical communication industry. When Yurii was recruited from IBM, we knew how fortunate we were. We’re delighted that he was recognized with this well-deserved honor. What is more impressive is his continued innovative spirit and bold transition to a completely new field – brain research, which I am sure will generate huge societal impact.”