Xiuling Li has been named Interim Director of the Nick Holonyak Jr. Micro & Nanotechnology Laboratory (MNTL), effective January 20. She succeeds Brian Cunningham, who has served in the director role for the past seven years (including two years as interim director). 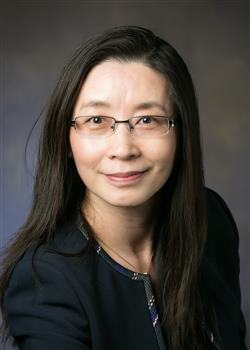 In an email announcing the decision, The Grainger College of Engineering Dean Rashid Bashir said, “In this position, I look forward to [Li’s] leadership, in close collaboration with the Holonyak Lab faculty and staff, to enable continued scientific discovery and engineering innovation in nanotechnology in general, and bring new focus to its research thrusts strategically to define MNTL’s leading position in electronics, photonics, nano and quantum technology, as well as biotechnology. I am confident in her ability to step up and provide leadership for MNTL for the foreseeable future.”

Li, a Willett Faculty Scholar, is an internationally-recognized expert and leader in the field of semiconductor nanotechnology who joined the University of Illinois’ Department of Electrical and Computer Engineering (ECE) in 2007. She holds a B.S. degree from Peking University and Ph.D. degree from the University of California at Los Angeles.

After receiving her doctorate, she held postdoctoral positions at the California Institute of Technology and Holonyak Lab, as well as enjoyed many years of industry experience at II-VI, Inc. (formerly EpiWorks, Inc.) Five years after joining the ECE Illinois faculty, she was promoted to associate professor in 2012, and to professor and Willett Faculty Scholar in 2015.

Li has published more than 150 journal papers and holds more than 20 patents in the area of semiconductor materials and devices. She is a Fellow of the IEEE, American Physics Society (APS), and Optical Society of America (OSA). Her other honors and awards include an NSF CAREER award, DARPA Young Faculty Award, and ONR Young Investigator Award. She is a Deputy Editor of Applied Physics Letters. She is also the Vice President for Finance and Administration of the IEEE Photonics Society, a society for which she has held various other roles.

In The Grainger College, she has served on numerous departmental and college administrative committees. According to Bashir, she has been actively involved in the department and has a strong rapport with all faculty, staff, and students.

“I am honored and humbled to accept this position,” Li said. “I look forward to working with HMNTL faculty and staff to move the lab forward.”