Harshil Dave, a fifth year PhD student at the Nick Holonyak Jr. Micro and Nanotechnology Lab, recently received what his advisor, Holonyak Lab and ECE Proffesor Kent Choquette says was “the most concentrated series of honors that any of my students have ever received.”

Harshil Dave, a fifth year PhD student at the Nick Holonyak Jr. Micro and Nanotechnology Lab, recently received what his advisor Kent Choquette says was “the most concentrated series of honors that any of my students have ever received.” Among these were the “Chapter of the Year” award as the Chair of the IEEE Photonics Society Student Chapter, a 2019 IEEE Photonics Society Graduate Student Fellowship, an invitation to speak at a graduate student forum on best practices for student chapters at the conference, and finally a oral presentation on his thesis research as well as second place award for his poster given at the IEEE Photonics Conference. 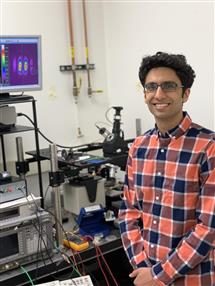 With all of these accomplishments, Dave could have a lot to brag about; however, he attributes his success to trial and error, along with input from his peers.

“I feel lucky,” said Dave, an electrical and computer engineering student. “It’s not just my success. The work that I do isn’t in a vacuum; it’s connected to a lot of the work that my colleagues do and the people who I learn from.”

Dave also attributes his success to time spent in the IEEE Photonics Society. The student chapter of this organization at Illinois hosts a seminar series on campus, participates in Engineering Open House, and is involved with a number of local outreach programs.

One specific instance of public outreach was when he and another student visited a local junior high school.

“You get to put together fun but educational programs,” says Dave. “There has to be that connection between academics and the people they interact with in their communities.”

Dave said that participating in this organization means that he gets to learn from many different people and that doing so has contributed to his success in graduate school.

“When you have to talk to other people about your research, it forces you to think about what the most important aspects of your work are and how to effectively communicate those,” he said. “You get to spend time re-evaluating what you’re doing and that’s helpful.”

Dave said his success at Illinois came from exposing himself to a lot of different topics and areas in photonics, as well as adhering to the classic mantra of “try, try again.”

“I didn’t just focus on just one aspect of research like experimenting. I took lots of different courses and tried a lot of different things,” said Dave. “At the same time, volunteering helped me by branching out to different areas. I learned things I wouldn’t have gotten by just sitting in class. It opened me up to new ways of thinking.”