To the average person, solar energy may still seem like the technology of the future, but the most common solar panels are reaching the limits of what they can do.

To the average person, solar energy may still seem like the technology of the future, but the most common solar panels are reaching the limits of what they can do. Striving for improvements in efficiency, Associate Professor Minjoo Larry Lee of Holonyak Micro & Nanotechnology Lab is advancing solar technology with an approach described in a new paper recently published in the journal Solar Energy Materials and Solar Cells .

“About 90% of solar cells sold in the world are made out of silicon,” said Dr. Shizhao Fan, a postdoctoral associate in 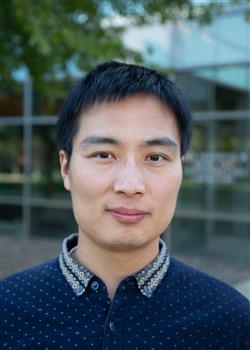 Photo of Shizhao Fan
Lee’s research group and lead author of the study. “The solar industry has gotten really good at making them, but silicon solar cells are getting close to their limits in terms of how efficiently they can convert sunlight into electricity.”

To address this, Lee’s team turned to an idea that he says has existed theoretically for quite some time, but has only recently entered the realm of practicality – combining silicon with a second solar cell made from complementary materials so that the two work together in tandem.

“Just like in a tandem bicycle, where two riders can go faster than the individual riders on their own, a tandem solar cell can produce more energy than the two solar cells could by themselves,” said Lee.

The second solar cell, which Lee’s group is working to combine with silicon, comes from another family of materials with a long history in Holonyak Lab (formerly the Micro and Nanotechnology Laboratory): III-V semiconductors.

In addition to their widespread use in lighting and high-speed communication, III-V semiconductors are used on solar panels for satellites. They are much more efficient than silicon, but also much more expensive. By combining the two, Lee hopes to strike an optimum balance between cost, efficiency, and reliability. However, combining III-Vs and silicon is not without its challenges due to differences in material properties.

“We use a process called metamorphic growth,” said Fan. “The silicon and III-V solar cells [in this case GaAsP] that we are combining together have different lattice spacings – or the space between the atoms – so we make gradual changes in composition to bridge the gap.” The III-V solar cells in this work were grown in Holonyak Lab by a technique known as molecular beam epitaxy. 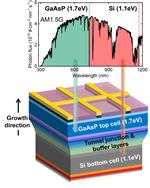 The silicon excels in converting the remaining light, which is at wavelengths just beyond what the human eye can see.

In their paper, Fan along with co-workers at University of Illinois and Arizona State University, demonstrated a GaAsP/Si tandem solar cell with 20% efficiency, tying the current record for this cell architecture. They also presented the first experimental proof that tandem efficiencies of 24% may be just around the corner.

The collaboration with Professors Zhengshan Jason Yu and Zachary Holman at Arizona State was “critical for providing expertise on the silicon solar cell part of the tandem,” said Fan. Other co-authors on the study were Yukun Sun, William Weigand, Pankul Dhingra, Mijung Kim, Ryan Hool, and Erik Ratta.

While obstacles to commercialization remain, Lee is hopeful that this new type of solar cell will have a positive impact on future solar technologies.