According to the Centers for Disease Control, there are over 1.2 million people currently living with HIV in the United States. For these people, that means frequent trips to the doctor’s office for HIV viral load tests to ensure that the cocktail of self-administered drugs is at the right dosages.

Current techniques of measuring this viral load require the Polymerase Chain Reaction (PCR) to amplify the small viral nucleic acid quantities in a blood sample to detectable levels, with a sample-to-report process that can take up to several days.

Recently, the National Institute of Health (NIH) awarded an interdisciplinary team of researchers from the University of Illinois and Stanford University $1.6 million over four years to develop a handheld detection system and sensor cartridge that can pinpoint individual HIV particles in minutes. This effort is co-led by ECE Professor Brian Cunningham, who is also the Director of the Micro + Nanotechnology Lab, and his collaborator, Professor Utkan Demirci from Stanford University.

Demirci specializes in HIV and he has developed approaches to take an antibody that recognizes the HIV virus and captures the virus on a surface. Cunningham is an expert on optics-enabled biosensors, providing a transducer that registers a measurable signal for each captured virus.

In previous collaborations, the researchers have developed a method to directly detect between 100 and 1,000 viral particles, which, while useful for detecting viral loads in a newly infected patient, is not sensitive enough for patients undergoing recurring treatment. 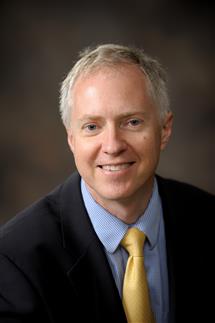 Professor Brian Cunningham
To achieve single-particle resolution, Cunningham is using an advanced detection instrument called a photonic crystal microscope, which includes a photonic crystal biosensor surface that reflects a particular wavelength of visible light like a perfect mirror, but lets all other light through.

“In our approach, we tag each HIV virus with a nanoparticle that absorbs a specific wavelength of light, so if we look at the light reflected from our photonic crystal at that one wavelength, you see a dark spot,” said Cunningham. “Our resolution will be high enough to count each [viral particle].”

Cunningham has named this novel detection method: Photonic Resonator Absorption Microscopy (PRAM). While the entire test process only takes a few minutes, Cunningham aims to accelerate the process even further by adding magnetic properties to the nanoparticle tags so they will attach to the sensor surface faster than by diffusion alone.

While other groups have used biosensors to detect viruses in the past, Cunningham’s group is one of the first to develop a biosensor with imaging capabilities. Furthermore, other groups working on HIV load measurement are focusing on miniaturizing and improving current indirect methods of detection that use PCR amplification.

Cunningham’s method directly counts each particle in the blood sample without requiring the variety of enzymes and reagents used in PCR. Cunningham’s vision is that within a few years, an HIV patient would just need to place their blood sample into a handheld device and be able to read the results off their smartphone a few minutes later – all in the comfort of their own home.

While the scope of this grant is currently limited to detecting the HIV virus, Cunningham’s proposed detection system is broadly applicable to other infectious diseases with well-described biomarkers such as dengue, influenza, hepatitis, malaria, and tuberculosis.