George Craford to receive one of IEEE's top honors.

University of Illinois Physics alumnus M. George Craford (MS 1963, PhD 1967) has been selected to receive the 2017 IEEE Edison Medal for a lifetime of pioneering contributions to the development and commercialization of visible LED materials and devices. Named for inventor Thomas Edison, the Edison Medal is presented to a person whose career includes meritorious achievement in electrical science, electrical engineering, or the electrical arts.

A Solid State Lighting Fellow at Philips Lumileds Lighting Company in San Jose, Craford began his career at Monsanto, where he invented the world’s first yellow LED and  significantly increased the brightness of red LEDs by adding nitrogen to the dominant GaAsP alloy technology. 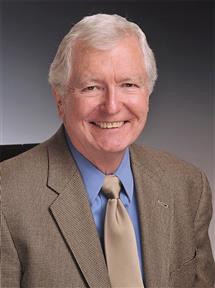 Craford is a member of the National Academy of Engineering and a fellow of the IEEE. He received the 2002 National Medal of Technology and the 2015 Draper Prize for Engineering, both of which he shared with his thesis advisor Nick Holonyak Jr. and fellow Illinois alumnus Russell Dupuis. In fact, Craford was first introduced to LEDs in Holonyak’s research group, which was located in the Electrical Engineering Research Lab—the forerunner of today’s Micro + Nanotechnology Lab.

In addition to Craford, other Edison Medal winners with ties to Illinois include Holonyak (1989) for an outstanding career in the field of electrical engineering with contributions to major advances in the field of semiconductor materials and devices; Dupuis (2007) for pioneering contributions to metalorganic chemical vapor deposition technology and continuous-wave room-temperature quantum-well lasers; and Illinois alumnus and Professor Floyd Dunn (1996) for creative contributions to the fundamental knowledge of ultrasonic propagation in and interactions with biological media.