ECE Assistant Professor Can Bayram was selected as one of the 56 scientists and engineers nationwide to receive an Air Force Office of Scientific Research (AFOSR) Young Investigator Award. This prestigious award program focuses on enhancing the early career development of outstanding scientists who have received their PhD in the last five years.

At Illinois, Bayram’s research focuses on developing novel photonic and electronic devices, including next-generation energy conversion devices. He is working on facilitating fast, efficient, low-power, affordable, and scalable technology solutions that offer a smaller footprint than conventional devices. One example of his group’s ongoing research is a novel light emitting diode that promises doubling the efficiency of existing white lighting sources. 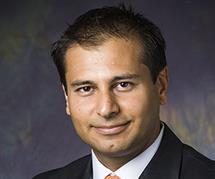 With the $360,000 in AFOSR support spread over three-years, Bayram will explore novel integration schemes to push the performance of these novel compound semiconductor-based energy conversion devices further while maintaining the scalability and industrial adoption. Bayram and his team will engineer wide bandgap Gallium Nitride (GaN) semiconductors for solid-state lighting and next-generation electronics applications.

“With respect to conventional semiconductors such as silicon, wide bandgap materials such as gallium nitride offer improved power handling capabilities and reliable operation under harsh conditions,” explained Bayram, who invented GaN-on-graphene and GaN-on-silicon technologies for novel scalable device architectures during his time at IBM. “Our goal at Illinois is to explore the limits of these new GaN devices, particularly in photonics and electronics.”

Bayram’s Innovative COmpound semiconductoR (ICOR) Group is located in the Micro and Nanotechnology Laboratory (MNTL), where they will develop simulation tools, perform micro/nano-fabrication, and carry out device characterizations with the AFOSR support. “Each of these steps are critical in achieving the theoretically-projected performance and are equally important in identifying, investigating, and overcoming the bottlenecks,” he said. “The most vital part of this kind of lab-to-life research is attention to details as the quantum devices are very sensitive” he adds.

Before joining the Illinois faculty, Bayram worked as a postdoctoral research scientist at the IBM Thomas Watson Research Center from 2011 to 2014. He earned his PhD degree in electrical engineering from Northwestern University in 2011.

According to Bayram, having experience in both industry and academia has a positive impact on his teaching and research. As an Illinois faculty, Bayram was also awarded the 2014 IEEE Electron Devices Society Early Career Award in recognition of his established and emerging contributions in electron devices.