Champaign-based Epiworks, a compound semiconductor wafer company, to become wholly-owned division of II-VI with plans to expand production in Illinois.

Semiconductor wafer foundry EpiWorks, which was founded by MNTL researchers, is being acquired by Pittsburgh-based II-VI Inc., a global leader in semiconductor lasers. The $49 million acquisition will expand II-VI’s technology platforms and production capacity for lasers, allowing the company to meet the needs of the fast-growing market for vertical cavity surface emitting lasers (VCSELs) for consumer electronics, data centers, sensing, and medicine.

Located in Champaign, EpiWorks will continue to operate as a separate, but wholly-owned division of II-VI, named II-VI EpiWorks, and plans to expand production in Illinois. According to EpiWorks Executive Vice President David Ahmari (PhD EE 1998), the demand for high-performance epitaxial wafers had been exceeding Epiworks’ manufacturing output even after the company expanded its metal organic chemical vapor deposition (MOCVD) crystal growth production capacity in 2015. 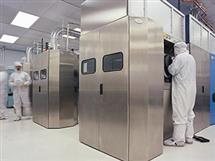 “By merging with II-VI, EpiWorks has access to substantial expansion capital, a global footprint and sales support around the world,” said Ahmari, who will remain responsible for EpiWorks’ sales, marketing and technology. “Our goal is to provide our customers the most complete range of semiconductor solutions in the industry along with global scale. Teaming with II-VI allows us to go beyond the typical epiwafer foundry model by offering not just scale, but a level of sophistication, flexibility and capability needed in our industry as it is scaling and evolving.”

Added Epiworks CEO Quesnell Hartmann (PhD EE 1998): “We are excited to join the II-VI family and push the envelope of performance in our industry. We have a creative, multi-year plan for capacity, new capabilities, and novel products that cover a wide range of industries and markets.” When the merger is complete, Hartmann will continue as the general manager of the EpiWorks business unit.

Ahmari and Hartmann, who had developed novel material deposition techniques and designs for high-performance III-V epitaxial devices as part of their PhD studies, founded the company with their faculty advisor Greg Stillman in 1997. Over the years, Epiworks has scaled production for wireless RF chipsets, VCSELs, edge-emitting lasers, detectors, and solar cells.

The company has also maintained close ties to MNTL. In the early 2000s, Epiworks grew wafers for Professors Milton Feng and Nick Holonyak Jr. “The transistor laser was made from our materials,” noted Ahmari, referring to the groundbreaking device that produces electrical amplification and stimulated emission simultaneously.

“We made the commitment a long time ago to stay here, and we got a lot of support from Greg and the university,” said Ahmari, recalling the company’s early days of performing proof of concept work at MNTL. “In return we promised to try our hardest to stay here, so that’s what we did. Our goal is to help build a critical mass so the University of Illinois would be a hub for not just semiconductor research, but also for commercialization and production.”