Not everyone knows what vertical-cavity surface-emitting lasers (VCSEL) are, but it's a safe bet you use them every day. They're in your computer mouse and laser printer, and most recently used in 3D sensing such as facial recognition (Apple FaceID), LiDAR, and augmented/virtual reality headsets and glasses. But advancing technology for these next generation applications means increasing the optical output power and beam quality of these lasers without compromising the longevity and manufacturability of these devices.

Researchers from the Advanced Semiconductor Device and Integration Laboratory at the University of Illinois Urbana Champaign, led by Professor John Dallesasse, not only created a more powerful single-mode VCSEL, they broke a world record doing it.

Their research, which was recently published as an Editor's Pick in Applied Physics Letters, demonstrated several single- mode VCSEL capable of exceeding 10 milliwatts. The previous highest powered VCSEL was 7-8 milliwatts.

The team did this by achieving single- fundamental- mode lasing through a method called impurity- induced disordering. Lasing is similar to a feedback loop, where a light particle will stimulate electrons to give off a duplicate photon the more it bounces back and forth from the mirror of a cavity. By using disordering, select areas of the mirror become smeared and lose reflectivity. Researchers were able to intentionally induce strain to control the disordering front such that the higher-order modes are suppressed while allowing the single- fundamental- mode to lase selectively. 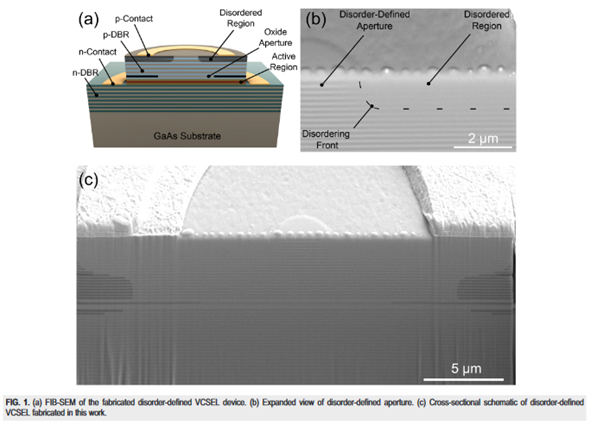 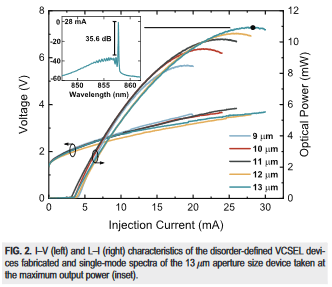 "The work that I've done here is basically make single- mode VCSELs give out higher output power while operating in the single-fundamental-mode," said Su. "So we could address the situation of you have to have higher output power to have more, higher fidelity 3-D sensing mapping. This basically increases the operating ranges of depth mapping systems for smartphones and AR/VR headsets so you can use it out to even 10 meters."

That's huge for companies like Apple, Meta, and Google as they pursue the next step of augmented reality and next generation consumer electronics.

"I truly believe that VCSELs will be in every single device that is to come in the next five to 10 years," said Su. "The next AR glasses, iPhones, smartphones, you name it."

The Advanced Semiconductor Device and Integration Laboratory was founded by Professor John Dallesasse, and focuses on Microelectronics and Photonics. Research areas include Lasers and Optical Physics, Semiconductor Lasers and Photonic Devices, and Photonic Integrated Circuits (PICs). Dallesasse started as an associate professor at UIUC’s Department of Electrical and Computer Engineering in 2012. He is the co-inventor of III-V Oxidation, along with Nick Holonyak, Jr., an important process technology for compound semiconductor devices, especially VCSELs.