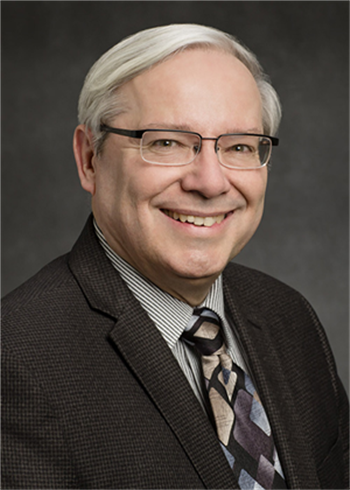 Professor Van Harlingen received his bachelor's degree in physics in 1972, and his Ph.D. in physics in 1977, from The Ohio State University. His thesis title was "Thermoelectric Flux Effects in Superconducting Indium". After a year as a NATO postdoctoral fellow in the Cavendish Laboratory at the University of Cambridge, England, he held a postdoctoral research position at the University of California at Berkeley for three years, where he worked on non-equilibrium superconductivity and dc SQUID electronics with Professor John Clarke. He joined the Department of Physics faculty at the University of Illinois as an assistant professor in 1981, and is currently a professor of physics at the Materials Research Laboratory and the NSF Science and Technology Center for Superconductivity at the University of Illinois. Professor Van Harlingen became a member of the American Physical Society in 1975 and a Fellow in 1996. He received the prestigious Oliver E. Buckley Prize in Condensed Matter Physics from the APS in 1998 and was elected a member of the American Academy of Arts and Sciences in 1999 and to the National Academy of Sciences in 2003.

Vortex Configurations and Dynamics in Superconductor Arrays
Magnetic vortices dominate the thermodynamics and transport properties of microfabricated superconductor arrays and two-dimensional superconducting films. We are studying the motion, pinning, and interactions of vortices by a combination of experimental techniques and computer simulations. The standard approach is to measure magnetotransport properties that reflect the averaged vortex dynamics. In addition, we have developed a scanning SQUID microscope system that allows us to image directly the spatial arrangement and monitor the dynamics of discrete vortices. Images of the configuration of vortices in large arrays and clusters have been obtained and analyzed in terms of vortex diffusion and trapping models.

Experimental Determination of the Pairing State of the High-Temperature Superconductors
We are probing details of the order parameter in the high-temperature superconductors by Josephson tunneling and SQUID interferometry measurements. Using edge junctions fabricated on cuprate thin films to define the tunneling direction, we can measure both the magnitude and relative phase of the order parameter in arbitrary ab-plane momentum directions. In particular, we are studying SQUIDs with junctions on the (100) and (110) faces of YBCO to test for surface-induced subdominant complex order parameters with broken time-reversal symmetry. We are also studying the effect of the loop inductance on the spontaneously generated magnetic flux in corner SQUIDs incorporating a d-wave superconductor. By varying the inductance in situ by moving a superconducting shield, we can test for the predicted abrupt onset of the spontaneous circulating current at a particular value of the inductance screening parameter.

Magnetic Imaging of Vortices in High-Temperature Superconductor Films and Devices
We are using scanning SQUID microscopy (SSM) to study vortex dynamics and pinning in superconductor samples. The SSM provides adequate spatial resolution and unparalleled flux sensitivity for imaging magnetic field distributions, making it useful for imaging vortex distributions around defect structures in superconducting thin films and crystals. We have used the SSM to image flux distributions and to study vortex motion around surface steps in the superconductor NbSe2 and in Nb films with microfabricated steps and trenches. These results are being compared with transport measurements of the critical current and magnetization measurements of flux entry and exit from superconductor samples.

Phase Coherence and Bound Quasi-Particle States in Mesoscopic Superconducting Structures
We use scanning tunneling microscopy (STM) to investigate confined quasi-particle states in inhomogeneous superconductor structures. STM is a powerful tool that can simultaneously determine the surface structure and give information on the local electronic density of states. We have observed quasi-particle states bound in normal metal islands on top of a superconductorâ€”the STM detects the spatial variation and energy dependence of the tunneling conductance. These experiments give information about the interface between superconductors and normal metals, the dynamics of quasi-particles, and the proximity effect. These measurements are being extended to study charge transport in semiconductor-superconductor interfaces and bound states in vortices and at interfaces in d-wave superconductors.

Search for Subdominant Order Parameter Phases in d-Wave Grain Boundary Junctions
We are carrying out experiments designed to test for the onset of subdominant superconductor phases induced by perturbations in d-wave superconductors. Phases with complex order parameters are predicted to arise from the suppression of the d-wave order parameter at surfaces and in the vicinity of magnetic impurities by Andreev reflection. We are fabricating grain boundary junctions in pure and magnetically doped cuprate films and measuring the critical current at low temperatures, searching for signatures of a phase transition to a secondary order parameter state. The critical current modulation with applied magnetic field is also being monitored to extract phase-sensitive information about the order parameter.

Nuclear Magnetic Resonance Imaging Microscopy Incorporating High-Temperature Superconductor Microcoils
We are developing a unique nuclear magnetic resonance imaging microscope (NMRIM) designed to probe the magnetic microstructure of condensed matter and biological systems. The innovative and critical feature of this instrument is the use of planar microcoils fabricated from high-temperature superconductor thin films. This approach utilizes two schemes for improving the signal-to-noise ratio in NMR microscopy: reduced detection of coil size for enhanced signal sensitivity and the implementation of high-temperature superconductor materials for decreased noise. Our goal is to incorporate these into an instrument with spatial scanning capability to attain unprecedented signal sensitivity and spatial resolution for NMR microscopy.