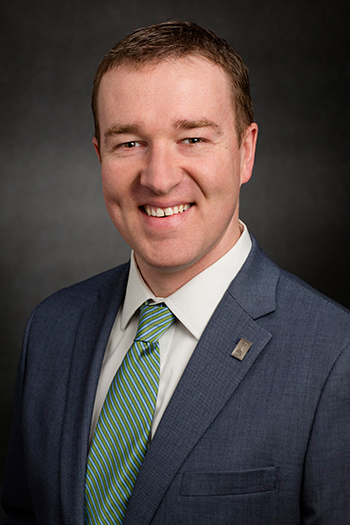 Brendan Harley is currently a Professor in Chemical and Biomolecular Engineering and a research theme leader in the Carl R. Woese Institute for Genomic Biology at the University of Illinois at Urbana-Champaign. Dr. Harley develops biomaterials that replicate the dynamic, spatially-patterned, and heterogeneous microenvironment found in the tissues and organs of our body. He and members of his lab use this approach to generate new insight regarding how biomaterial cues can instruct cell responses in the context of development, disease, and regeneration. Harley co-authored the book ‘Cellular materials in nature and medicine’ (Cambridge University Press, 2010) along with more than 100 peer-reviewed manuscripts. Harley has received funding from the NSF, NIH, American Cancer Society, the U.S. Army, and the AO Foundation. He recognized as a 2013 recipient of a NSF CAREER award, the 2014 Young Investigator Award from the Society for Biomaterials, and was elected a Fellow of the American Association for the Advancement of Science (2014). He co-founded UK-based Orthomimetics, Ltd. (acquired by TiGenix, Ltd.), currently performing Phase I clinical trials on a material to repair osteochondral defects in the knee. Professor Harley joined the department in 2008. He received his SB from Harvard University in 2000 and SM/ScD from MIT in 2002 and 2006. His post-doctoral studies were completed at the Joint Program in Transfusion Medicine at Boston Children’s Hospital.

Scientists, engineers, and physicians have for decades worked to better understand the onset and progression of disease, prevent further damage after injury, and develop approaches to enhance healing. A critical bottleneck in these efforts is the complexity that arises from the non-uniform properties of the tissues and organs of our bodies. The tissue microenvironment can vary in time – such as during development or with chronic disease – or in space – such as gradients in cell and matrix content found across tumors and musculoskeletal tissue insertional zones.

Such heterogeneities have inspired me to develop approaches to create unique biomaterials that are dynamic, spatially-patterned, and inhomogeneous over multiple length and time scales. To do this my lab is engineering biomaterials at the structural, mechanical, and biomolecular level. We have demonstrated: (1) multi-scale and bio-inspired composite design strategies to balance functional and biomechanical concerns; (2) techniques to create spatially-graded and overlapping patterns of cells, matrix, and biomolecules across biomaterials for regenerative repair of orthopedic insertions and to mimic the tumor microenvironment; (3) biomaterials to regulate temporal processes such as transient growth factor sequestration or the balance of paracrine vs. autocrine signals in an artificial stem cell niche.

These biomaterials provide unique tools to explore the impact of the tissue environment on the behavior of cells in the context of development, disease, and regeneration. They offer promise as materials to be implanted into the body to speed recovery after injury.